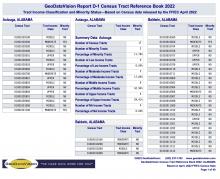 GeoDataVision President Len Suzio announced the release of the free 2022 Census Tracts with Majority-Minority tract designations. "The FFIEC released these files 10 days ago and we at GeoDataVision are making available for free listings of the new 2022 tracts so bankers and the public can identify the new tract identities and those determined to qualify as "Majority-Minority" status based on a minority population that exceeds 50% of a census tract's total population. These are very important for Fair Lending analysis", said Suzio.